I get asked a lot of questions. In fact, I feel guilty for monopolizing discussions at parties because I am so passionate about bees and people are so interested!  So I thought I’d post a Q& A, starting with the number one question I get asked and then moving forward randomly from there.

THE NUMBER ONE QUESTION I GET ASKED?  (drummroll)….

Q: Do you get strung?

If I get strung it is usually because I have done something to scare the bees and I wasn’t using proper gear.  I have been stung twice for no particular reason other than a bitchy bee, and both times I was a yard of more from the hive. So go figure. And since it comes up…the most I have ever been stung at once is a dozen stings in my hand. I had to take all my rings off quickly so we wouldn’t have to cut them off. And the time I got stung on the nose wasn’t so great, either — both eyes swelled shut and I missed a couple days of work. No, I am not allergic, but I do have what is considered an “extreme” reaction and I swell like a frank cooking on the spinner at a ballpark. Yes, I do have an Epipen, just in case 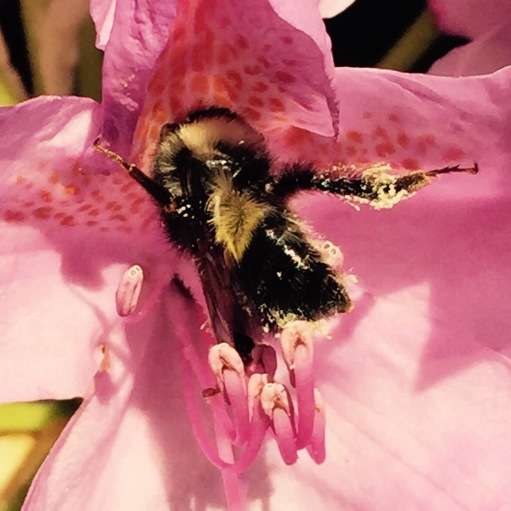 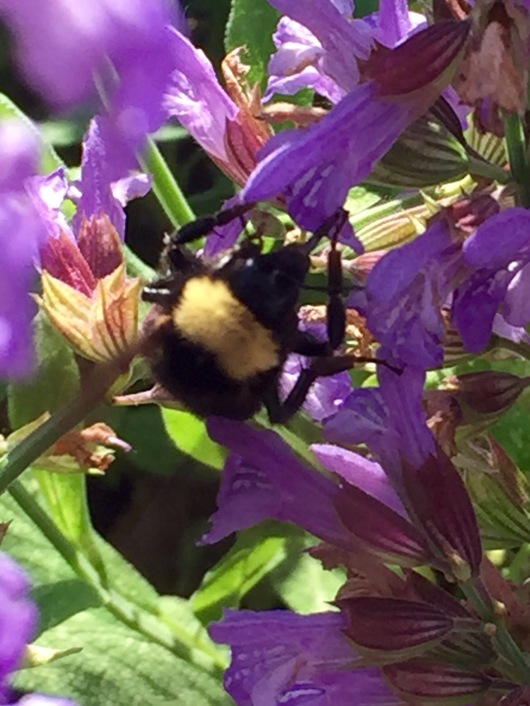 A: These are bumble bees. They are big fuzzy pollinators that are even less likely to sting than a honey bee. At one time this spring I counted 5 different varieties of this bee in my rhododendron.

Bumbles do not build comb the way a honey bee does. They build nests in empty spaces like woodpiles, rodent holes or birdhouses. They only stay in the same place for one season. Last summer I had bumble bees take over an empty birdhouse. 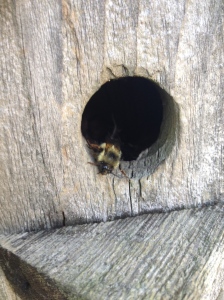 Q: Why are honeybees dying?

A: This is a complicated question. In truth we don’t really know. We do know is that 42% of all hive DID NOT make it through the 2014-15 winter. Some reasons are obvious like the greatly increased numbers of hives decimated by diseases or pests. But there are just mysterious die-offs that seem to offer no solid explanations. I practice a natural, treatment free form of beekeeping in a Top  BARHive and it is MY PERSONAL BELIEF that when  you try to get bees to conform to human needs, you put  undo stress on the bees. Stressed organisms of any sort  will show increased instances of illness and death. That is  a fact. I’m not saying foundation creates problems, I just am left wondering about how the many ways we change what bees would naturally do affect the overall health of the hive.

“Traditional” forms of beekeeping (Langstroth) involve the use of man-made sheets of wax  on frames for bees to lay their eggs in and to put honey in. The problem with this is that bees make different sized cells for workers, drones or honey.  I haven’t asked a bee how they feel about “one-size-fits-all” but as a human female, there is no circumstance in which this works for me!

Secondly, traditional beekeeping is set up to maximize honey production so bees have the food they created for themselves removed and replaced by food humans think would be good for them. Again, I can imagine a situation in which this would work for a human.

Third, it is my PERSONAL BELIEF that chemicals should be used as a last resort for both humans and bees. Traditional hive management involves treating bees with “medicine” regularly to prevent issues. (A fellow UK beekeeper, Emily,  just told me that using chemicals without need in England is illegal!) To me, this is a little like fluoride in water or giving a mild antibiotic for no particular reason. There are other ways and times in which “treatment” may be appropriate, but so far, I haven’t had to deal with this. Some beekeepers think that not treating is irresponsible (like not vaccinating your children) but I believe in PAYING ATTENTION to what is happening in my hives and  being pro-active, instead of reactive.   I should say, that not all Langstroth hives are managed the way I mentioned, and not all beekeepers who use them are using plastic frames and chemicals. It is possible to allow the bees to build their own comb in a Langstroth and to leave their honey (mostly) for them to it. But that is also considered an “alternative” style of beekeeping. (go to BEE THINKING for info on fabulous hives and “alternative” natural beekeeping methods!)

Q: What was with the truck that over turned and killed all the bees?

A: Bees are necessary to pollinate crops. Moving bees from place to place to pollinate different crops is a big industry in the farming world. Beehives (Langstroth boxes) are loaded onto trucks and transported at night, when the bees are quiet, to a new field. The millions of bees that were killed when the truck they were being transported in overturned  near my house were enroute to blueberry fields in northwestern Washington from eastern Washington where they had been hanging out with apple trees. Before that, they were likely in California Almond fields. All in all, approximately twenty million bees died.

Q: How many bees do you have?

A: I start with about twelve thousand bees in a new hive in the spring.

That number will increase to approximately fifty thousand bees at high summer. When they get too big for their house, they will split off and “swarm” to find a new location.

Q: What can I do TODAY to save the bees?

A:  First, don’t use Round-Up on flowering weeds (like Dandelions). If you HAVE to use it, use it only on non-flowering plants. Better yet, get rid of it at a toxic cleanup day at your local garbage dump. The chemicals in weed killers stay in the ground for a very long time and can end up in our water supply. It isn’t hard to weed, people….get your exercise by digging them up! Neonicoitinoids, an ingredient in  Round-Up and other weed killers, are suspected as being contributors to pollinator decline. I suspect that is what caused me to nearly completely loose the Amanda hive in February.

The Xerces Society says this about neonicoitinoids on their website:

Second, leave some water out for the bee-friends! Simple enough, but you need to make sure that it isn’t just a dish of water….how will they land to drink? I have the saucer part of outdoor pots filled with rocks and water.  Sometimes you may find a bee that looks exhausted or cold, particularly in the mornings. The best thing you can so is offer a tiny bit of regular white sugar (NOT HONEY!) mixed with a tiny bit of water on a spoon. This should revive them pretty quickly as a dear friend figured out this week! 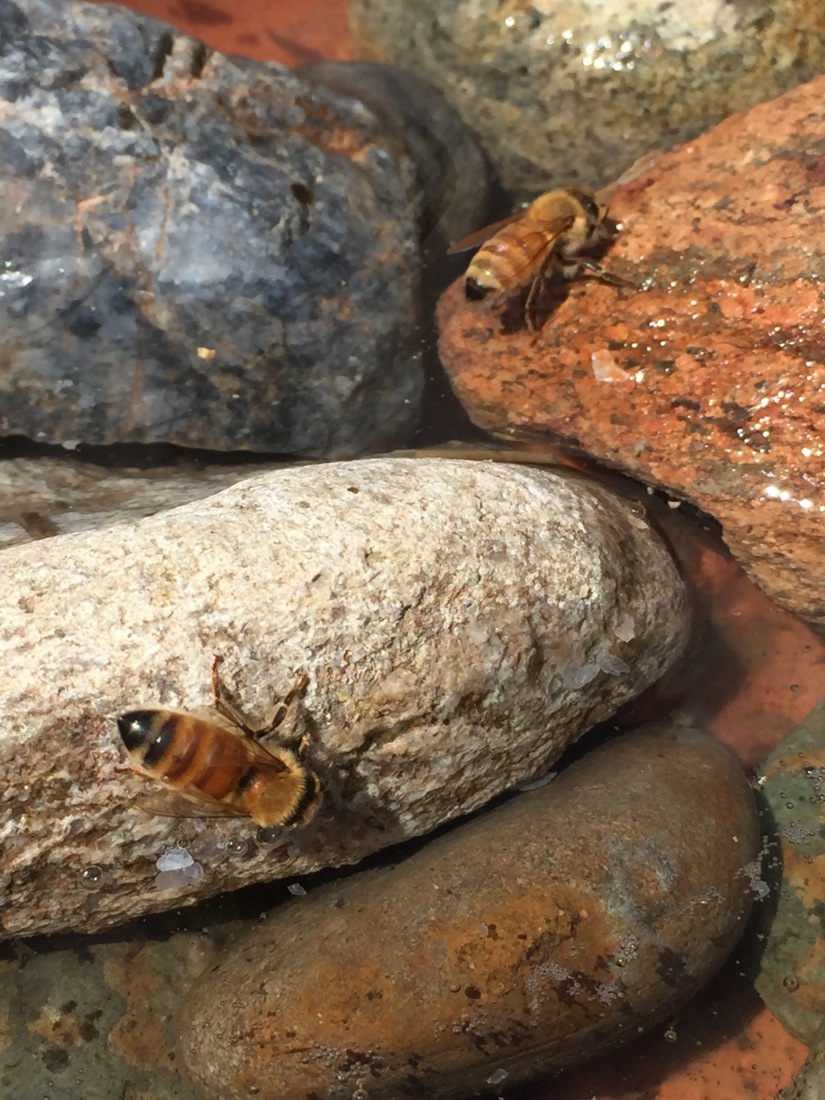