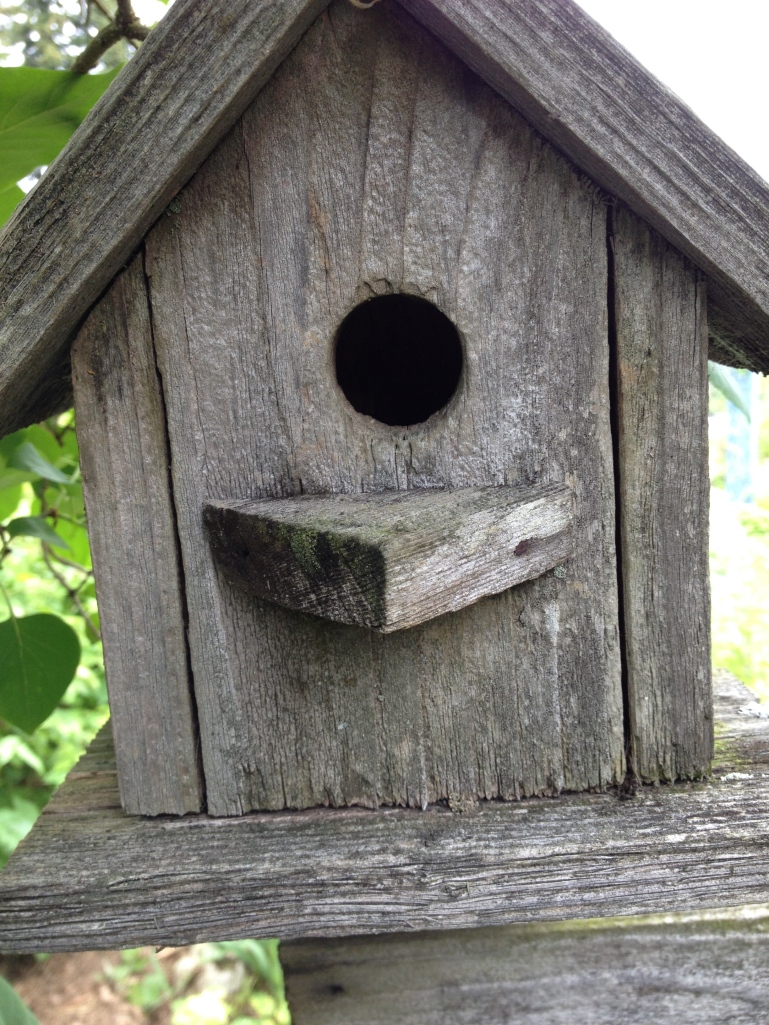 I was trimming the climbing rose that winds around my favorite garden ornament/birdhouse when I heard a familiar sound.

In fact so familiar that it took several minutes to place it. It sounded like voices, or singing, or low arguing or…..BEES!

A fuzzy black, yellow and orange bumblebee stared at me grumpily from the birdhouse roof before disappearing into a crack under the eaves.

I jumped up on the garden bench, shining the pinpoint flashlight on my phone into the birdhouse door (ah! the joy of technology always at your fingertips).  I could see…well…it looked like someone had fluffed up the bird nest the little Junco’s had only recently abandoned. I leaned in closer.

A bee emerged from the dark, perching in the doorway. She stared indignantly at me. Another peeked over the edge.

It made me laugh – I could pretty much hear them chewing me out for disturbing them though they never flew at me in any sort of threatening way.  I walked away and they disappeared. 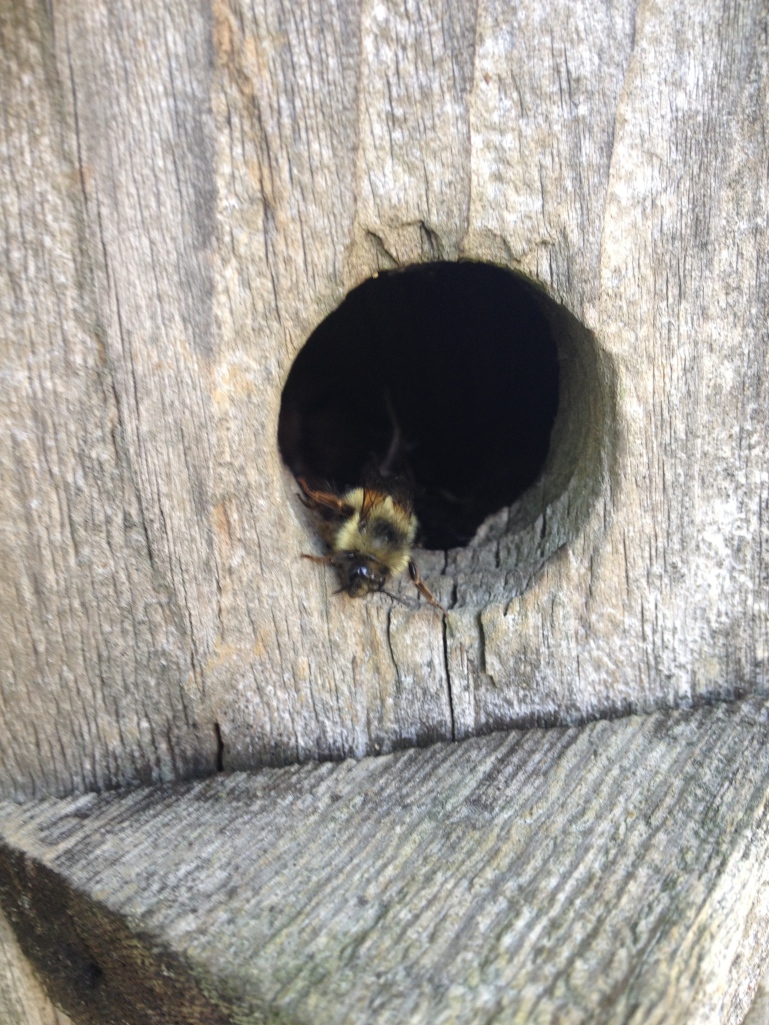 I  was terribly excited.

But I didn’t EVER see any bees in or around the house after that.

I thought I had scared them away. The clouds of several different species bumblebees that loved my raspberries had long since gone, and, not knowing anything about bumblebee behavior, I assumed these had left too.

So, a month later I got curious about their “hive”  and lifted the roof off the bee/birdhouse. 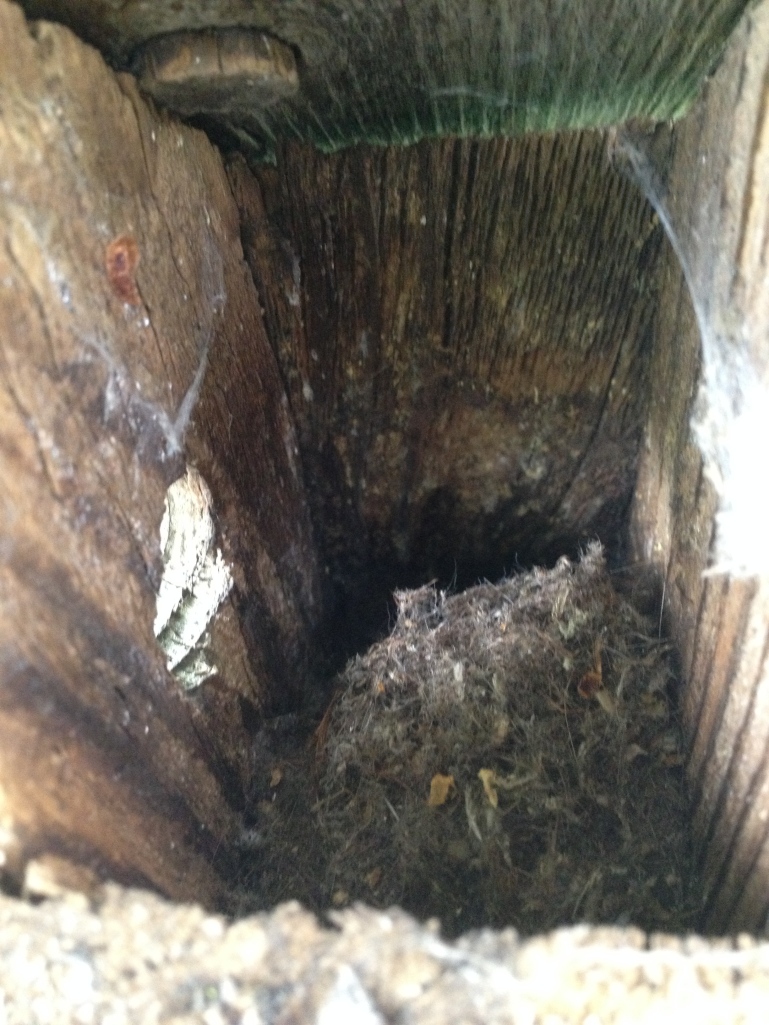 Inside the bird house (this photo is looking down from the roof) was a ball of bird nest material that had clearly been rearranged, leaving it quite different from its original nest shape. It appeared abandoned and I stuck my  bare hand in and poked it.  It was hard, as if it was made of clay.

I collect abandoned bird nests, and the idea of a bird/bee nest was too tempting. I donned my rubber beekeeping gloves and reached in again.

It was the fourth of July and there was a lot of noise, so I didn’t really hear the first warnings.  I only sort of heard the second.  But as I grasped the nest, ready to pull it out of the hive, I absolutely heard the third.  I yanked my hand out of the hive just as a very angry lady emerged, quickly followed by another. I had just trespassed. 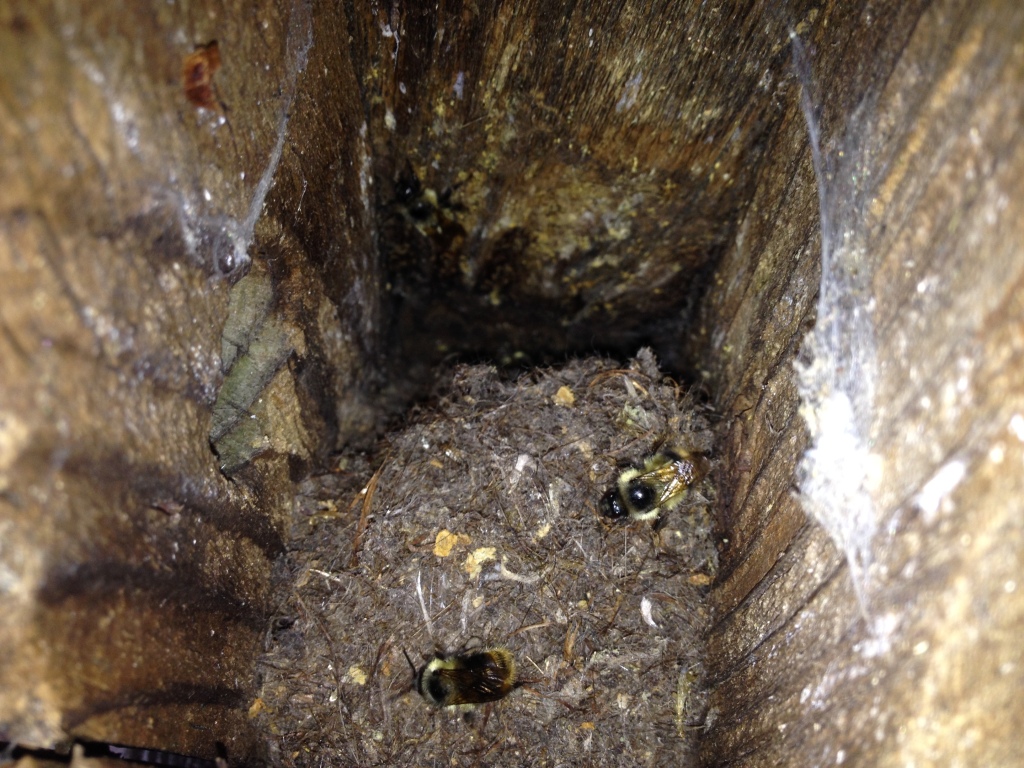 Bumblebees are remarkably docile.  Or at least mine are.  Luckily for my stupid beekeeping self.  These ladies were fierce but gentle as they clearly communicated their displeasure.

I screwed the roof back on the bird/beehouse and backed off. One of them inspected the entire house before returning inside. I promised I’d stay away from their summer home. 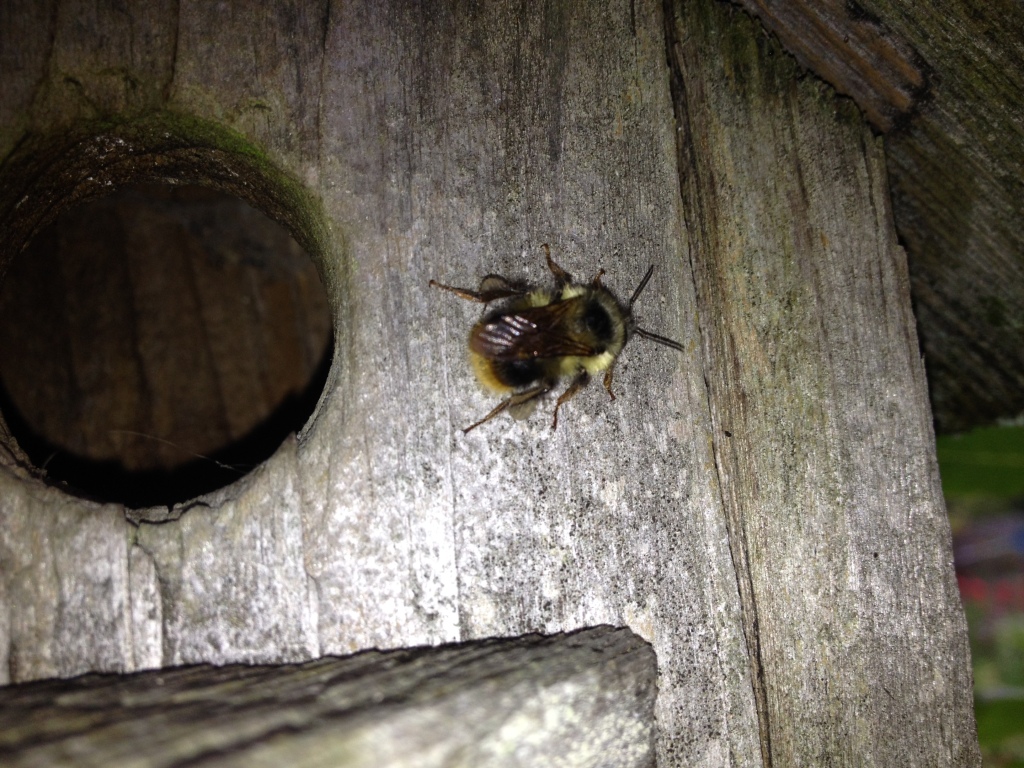 I am thrilled to be hosting this sweet family and expanding my knowledge as a beekeeper and as a fellow inhabitant of the planet. Bumblebees essential pollinators and without their help, our food chain would suffer dramatically. They are dying in alarming numbers, and it is not entirely unlikely that we could see the end of this species in our lifetime if we are not careful.