The death of half of my hive in late May has weighed heavily on me, keeping me out of the hive and away from my blog. Since then the survivors proved their efficiency and the hive has fully recovered. The bees have turned chaos into organization and it is time for me to follow their lead and regain my momentum.

As I read up on beekeeping, each book talked about the “brood nest”,  which I took to mean that the eggs and larvae would be centralized within the body of the hive. But when my bees first established themselves, the entire hive was brood – 15 bars of it. It seemed to me that my Queen was far more disorganized than most and that my girls lacked the sense of bee-feng shui the books talked about. The Queen laid eggs everywhere in random blocks, the Sisters didn’t seem to mind crowded spaces,  instead building multiple combs on top of each other, 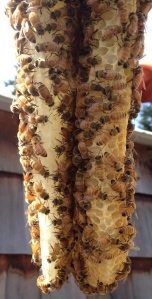 and they didn’t store supplies of honey/food they way I thought they would. But now, 80 days or so into it, my hive looks a lot more organized and “book-perfect”.  There is a line of honey on the top of most of the straight combs marching through the hive, complete honeycombs are being capped and there is a more centrally located area of brood in several stages though the Queen has slowed down her laying considerably. Recently I gave into the bees tendency to build two combs on one particular bar and surrounded the double comb they kept reconstructing with spacer bars so that it didn’t ruin the normal combs around it.

What originally seemed to be an overly enthusiastic thrown-together mess now looks filled with purpose and intent. The worst case scenario happened (a significant number of  bees dying) and  we still survived. The Sisters and I have seemingly relaxed into our roles. 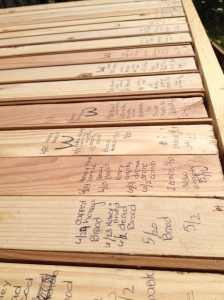 I check my hive every week or so and write notes about what I see on the end of each bar. When I open the lid, I have instant recall of where we left off the last check. (Of course this does meant that when next year rolls around I am going to have to figure out how to clean off the writing so I can start over!)

Starting at the back of the hive (the end away from the door) the most recent notes read “empty bar”, and “empty comb”. The next bars say “capped honey”, “honey & brood”, and frustratingly, “Doubled again – gave up”

Then come notes about larvae and worker and drone brood,  followed by “bee food” 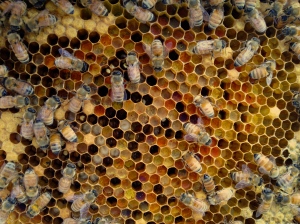 which is a bland way of describing the stained glass window effect of a dozen different colors of pollen that fill the cells.

Near  the entrance are two bars that said empty comb for several checks and now finally read “HONEY!”.  The last two bars in front of remain “empty comb” and “empty bar/festooning” as they have for several checks.  The bars also contain notes about needing more spacers, where the queen was last seen,  and where the drones seem to hang out.  It is a mini diary of the hive.

As I understand it, this is pretty close to the ideal hive arrangement and the Sisters did it without any interference from this overly curious beek!

But I do have a little work to do. In the next few weeks, I will need to move the bars of honeycomb that are in front of the door to the back of the hive to begin organizing the hive for winter. In winter, the colony stays in a tight ball in the hive and will only move as a group in one direction to maintain their heat. If the honey is divided into two sections (front and back of the hive) the bees may starve to death as they can’t move too far or cross cold and empty space for food. In an end entrance hive like mine, the bees automatically build headed away from the door, though mine did sneak in a couple of honey combs in the front. Some top bar hives have center entrances and must do more mid-season manipulation in order to make sure the bees do not surround themselves in honey by winter time.

And so both my writing and hive are buzzing along as the Sisters and I have regained our footing in our work. 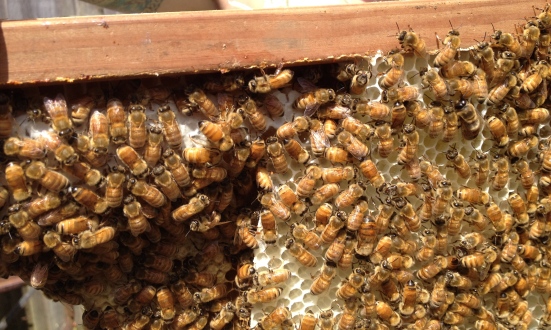