Nearly two weeks since settling my bees into their new home I took the time to do an extensive inspection of the hive. This meant I picked up every bar and spent several minutes examining each looking for brood, honey and the elusive queen.

I was excited to see that there was comb on 12 of the 26 bars currently available to them and about half of those were large-ish (in my opinion).

The first comb (about 4 bars in from the divider) looked like this: 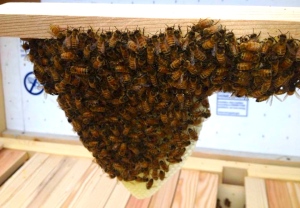 It was amazing how much they grew! BUT WAIT!  What is that in the center of the picture??? The queen had been marked with a white dot on her back so I could find her, but honesty, what caught my eye was that she moves different from the other bees.  Of course she is bigger, but she lumbers like she is too heavy for her legs.  She has a solidity that is very different from the rest of the bees…very regal and dignified even if she wasn’t already called “queen”.

I don’t exactly know what she was doing….to my eye she seemed to just be walking around on this beautiful new comb, but I imagine she was scoping out where to next lay her eggs.

Once the fascination with the queen wore off I realized my arm was unusually tired from holding up this bar for inspection.  Granted, it was a big one, but it seemed so dense.  I turned it around and found….

It was a double! The bees had built two completely matched combs back to back on the same bar. All the rules I had heard about bee-space (the amount of space bees want to have between combs) seemed thrown out the window.  The bees were clearly working on both sides of both combs. fascinated and surprised, I put it down and continued the inspection.

I found honey stores at the top of the combs:

Below the honey, along the inside half of the combs were some “capped” cells – baby bees carefully protected. (Those are the solid-looking yellow cells on the right of the comb)

And, I was lucky enough to see – and even more lucky to be able to take a picture of – bee pupa before they were capped!

By now I had spent a good 45 minutes taking pictures and admiring their handiwork though I felt like I was just looking without knowing what I was looking for.  I thought it all seemed pretty good. And then I came to the last bar with something on it: 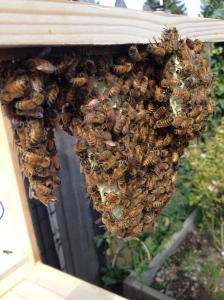 Oops – ANOTHER double comb!  (also notice the lovely “festooning” bees dangling on the left!) The second comb was pretty small – not even as big as my hand so I was pretty confident I could “fix” this problem.

I knew that since bees are picky about their space, two combs on one bar was going to cause trouble down the line.  I thought that maybe I would leave the big one to see what happened and cut the smaller one off and “plant it” on a new bar.  I decided to do some reasearch and closed up the hive for the night.

I had been nervous stirring up all the bees –  a lot of bees took to the air every time I lifted a bar, though they settled down quite quickly. I was badly in need of a sower and a relaxing glass of wine on the back porch!

So wine glass in hand, I sat in the waning sunlight watching the chickens and listening to the hum bees…..

There was an error retrieving images from Instagram. An attempt will be remade in a few minutes.